It is a major hammer-blow to the ideas of freedom, liberty, tolerance and globalised trade.

The financial crisis gave birth to the myth that globalisation, capitalism and liberalism were bad for the ordinary person.  Sure growth had a significant knock-back and many jobs were lost but this should not detract from the fact that prosperity in the free, liberal western world, vastly expanded in the years following the second world war.

But Donald Trump spectacularly took advantage of this feeling, assisted very ably by the disinformation spawned by the Kremlin and other actors, to win the presidency.

Congratulations should really go to Vladimir Putin, above all, and the Kremlin at large, for an orchestrated anti-Clinton campaign of disinformation, hacking and leaks.

Do be afraid.  The Kremlin now rules our democracies.  From the hackers to the lie factories, from the troll farms to the anti-news outlets such as Sputnik and RT.  We have been subjugated.  And many people are too thick to see through it – useful idiots, I believe the term is.

Though maybe the over-sized orange-skinned ‘useful idiot’ won’t be as bad as you expect.

He certainly won’t be as bad as some fear – predictions of nuclear armageddon are light years wide of the mark. Donald Trump’s number one priority is Donald Trump, and his wealth. Neither will likely be positively affected by nuclear war (though do be wary if he starts selling Trump bomb shelters). 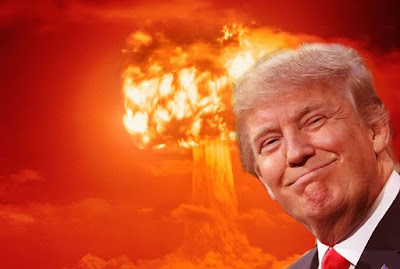 It is questionable how much power presidents have, clearly they have executive power, but they need to work with the Congress and Senate to ensure bills are implemented, despite both being Republican, this may be easier said than done – a fair few Republicans may not be too well-deposed to him, especially those caught in the crossfire in the primaries.

That muslim ban?  Not going to happen.  Carpet-bombing IS?  Hmmmm.  The ‘beautiful wall’?  About as likely as Obama closing Guantanamo Bay (the first thing he was going to do – remember?).

What most concerns me though is his message of anti-globalisation (similar to Corbyn and co) – the desire to put up trade barriers, the desire for protectionist measures against countries such as China that are “stealing your jobs, folks”, whom he has threatened 45% tariffs against.

These are policies likely to start a trade war, with affected countries putting up barriers, or perhaps dumping on world markets.  If America and, say, China got into a trade war, this would affect us all, and many other countries would feel the political pressure to reciprocate too.

Global trade has been a huge boon to economic, social and technological advance through the majority of the last few centuries.

There have been a few significant set-backs.  One was the 1930’s – a decade characterised by economic depression, largely due to protectionist measures from America and other trading nations.

It is my belief that this is the biggest danger of a Donald Trump presidency.  A danger not just to America, but the whole world.

Of course, the immediate societal impact is yet another setback to liberty, freedom and tolerance, in the western world.  The populists and nationalists are rising, helped by Facebook, helped by ignorance and helped by the Kremlin.  One could conclude that the racists, xenophobes and liars are now in control.

The other main worry is the undermining of NATO and the main strategic defence of Europe – and some of our closest allies and neighbours.  I’m not totally convinced that he will cause any direct damage to NATO – I suspect that it is threatening bluster towards the majority of NATO members that do not spend the agreed 2% of GDP on defence.  But still – another small victory for Putin.

I’m not impervious to understanding why people voted Trump.  I know many feel disaffected. Many feel like they are losers from globalisation.  Some are losers from globalisation (or you could argue, have not up-skilled themselves to meet the skills demand).  Governments both in this country and America could have done more in recent decades to ensure that their citizens were able to learn the new skills required – of which there are often shortages.

And Obama has not at all met the hopey-changey expectations – increasing the anger and disaffection of those who didn’t vote for him last time – a complete failure internationally (Iraq & Afghanistan drawdowns, non-action on Syria, no follow-up plan on Libya, etc etc) with a mixed outcome nationally.

So we have to live with Donald Trump as president for 4 years, possibly 8.  Though would he actually relinquish control?  He has shown such a disdain for democracy throughout the campaign.

Then again I reckon there is a fair chance that he will be impeached for something.  Or maybe even those comments about the Second Amendment will come back to bite him.

On the bright side, at least it wasn’t Ted Cruz.  Or even worse – Bernie Sanders.  And the news will certainly not be dull over the next few years.

Let’s hope that peace and prosperity do not follow liberty, freedom and tolerance into the sinkhole of 2016 politics.

Today is a sad day but the world has not yet ended.