I haven’t always been a straight-out for staying in the EU.

I once flirted with the idea of leaving the European Union, up until a couple of years ago, and top of my list of reasons for leaving was the Common Agricultural Policy (CAP).

40% of the EU budget is spent on farm subsidies – and it used to be more.

Historically there was a good reason for this – food became scarce during and after the Second World War, and this policy was brought in during 1962, partly to ensure a continuous supply of food across the European Community.  It would be no overstatement to suggest that there were severe food shortages across Europe during the 1950’s.

My main problem with it is that it distorts prices of farm goods and adds a layer of difficulty for farmers outside of the European Union to access our market.  Farmers in the European Union are being paid subsidies whilst being uncompetitive compared to farmers in poorer countries, and it is those poorer farmers from poorer countries that suffer.

There is also a slight cost to the consumer of this policy in terms of increased prices for goods and the fact that 40% of the £350m a week that we do not send to the European Union is spent on subsidising farmers.

During the late 1990’s and early 2000’s, there was a period when farmers were struggling to make a profit – partly due to Foot In Mouth disease (a quick hello to Liam Fox).  However many farmers are vastly profitable (not all), and many of them are quite rich.

For some, you could say stinking rich.  The CAP pays £400,000 a year to a farm where a Saudi billionaire breeds racehorses.  The Queen gets her share at over £500,000 a year.  So does the Duke of Westminster, Duke of Northumberland and the Mormons.  The highest earner gained nearly £3m in subsidy.  In total, something like £3bn is spent on farm subsidies in this country every year.

Of course, where you stand on globalisation and free trade will depend on your viewpoint here – but I am a globalist, I encourage further globalisation, and I argue that free trade has brought us economic and technological benefits that have ushered in a golden age of development, from consumer products to life expectancy, not just in this country but across the world – in free trading countries anyway.

To me this is outrageous, that landowners, no matter how rich are getting serious sums from the taxpayer, just for the privilege of owning farm land.

This was the number one horror of the European Union to me and in a sensible debate would have featured much more prior to the referendum.

And with the prominence of French farmers and their historical love of causing chaos, there is little the European Union can do other than slowly taper them down over decades. 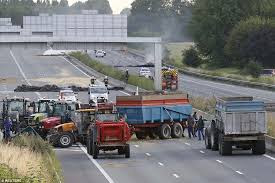 Unfortunately, Theresa May’s government has promised to keep the subsidy system in place until, 2020 (though the earliest it could go is 2019 anyway, with Brexit and all).

So if we do leave the European Union, I want to see an end to these distortionary and disgraceful farm subsidies.  If there has to be a system for poor and/or small farmers to receive some subsidy, perhaps in the short term until they become profitable, that is fine.  And I agree with continuing the portion of the CAP that is specifically for the protection of wildlife.

But these disgraceful sums of money must not be paid to such rich people going forwards.  This will be a test as to whether Theresa May’s government really is working for everyone.