On Wednesday, shortly after midday, the letter was submitted to the European Union that we were triggering Article 50.

Shortly after 10pm, my Margaret Thatcher mug fell down and broke. 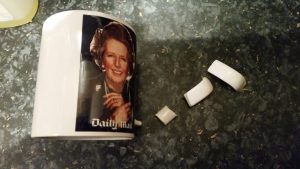 Normally I would have been annoyed, but I realised that this was a sign from Planet Brexit.  This was the culmination of 9 months of being pissed off with the direction of the Conservative Party, particularly under the leadership of Theresa May.

It wasn’t exactly something new.  It has been a long process of anger and loathing experienced when agreeing with people like Liz Kendall against my own party, over and over again, on the biggest issue of the day.

Ever since I can remember, I have always supported the Conservative Party.  I liked them as a young primary school child, albeit more due to preferring the colour blue.  I greatly admired Margaret Thatcher in my latter primary school days – and recall feeling sadness when she left.

I was sad and somewhat fearful when Tony Blair won in 1997 – I claim to be the first person to call him Tony B liar – it seemed like I was the only person to see through the spin at the time.  I was the only Tory in Hull back then, though afraid to argue my case as violence often accompanied an appreciation of the Conservative Party (one still could easily get punched for saying anything good about Margaret Thatcher in certain areas of Hull).

At university I didn’t really care too much – I did have a feeling that the world owed me a living for being clever enough to get to university, but yet still did not consider any other party than the Conservative Party.  Alas, I never voted.

Since then I have voted for the Conservative Party in almost every election, even crime and police commissioner elections.  The only time I voted for another party, was for tactical reasons in a local election – Labour still got something like 60% of the vote.

Even Michael Howard’s “are you thinking what we’re thinking” didn’t put me off, though I did shudder a bit.

It feels very sad, but finally I have to admit that the Conservative Party is no longer my party.  I can no longer identify as a Conservative.

It isn’t just about Brexit, as major a part as that is.  However, it is the prism through which everything will be judged for the next decade or two.

I cannot see much happening in the next two parliaments which is not Brexit-related – the amount of bills that will need working on will take up a huge amount of parliamentary time.  Meanwhile, serious problems run the risk of going unattended – infrastructure, social care, NHS, prisons, pensions – the whopping great big debt from Labour’s Great Recession – there simply won’t be the time, and more importantly, the political will for necessary reform in key areas.

And I fear about what will happen to government finances after the next recession – because one will happen and we are still spending far too much money.

Also I do not like Theresa May.  Like Michael Howard, there is something of the night about her – the remainer that did no campaigning for remain who suddenly thinks the hardest form of Brexit possible is ideal.  Converted overnight?  Rightio.

In my opinion, the two worst bills came from the Home Office (by the way, still waiting for a reply to my job application, if you are reading) during the previous government – the Psychoactive Substances Bill, and The Draft Communications Data Bill (Snooper’s Charter).  And some awful policy like curtailing the amount of foreign students in the attempt to meet that stupid 100,000 immigration target.  Am I really using the word, ‘stupid’?

Then you have to look at her recent, really quite vile threatening behaviour.  Firstly to sack Heseltine from his advisory position for voting against the government.  Then for the pathetic sitting in the House of Lords whilst they were discussing the Brexit bill, like a headmaster watching naughty school children.  Now we have the threat not to co-operate on security with the EU if they don’t give us a good deal.

(Yeah I know it’s The Sun, but it is repeated in all newspapers).

Can you imagine what Margaret Thatcher would think?  The woman who held such great stead in co-operating with our European neighbours against the dangerous Soviet communist beast – which is hardly any less threatening right now.

There is the argument that I should stay and argue my liberal beliefs.  I am…was…a liberal Conservative.  The section of the party represented by Cameron, Osborne, Clarke, etc.

However the UKIP-lite tail of Bone, Redwood and Rees-Mogg (you know, the ordinary working-class people that have taken back control from the elite) and now not only wagging the dog, but they are controlling the dog.  There is no room for a liberal wing.  They are the dog.

Brexit has to happen.  It will be offensive socially and culturally to me and I cannot identify with the political party bringing it about.  It should be economically damaging, if not worse (though I always said that there was a small possibility that it may bring a small overall benefit).  But there is no option unless there is a sudden swing in public opinion over the next two years.

Therefore I cannot allow myself to be associated by supporting the Brexit government.

Then there is the question, who would I vote for if there was a general election tomorrow?

Unless there was absolutely zero risk of a Corbyn government in which case I might vote Liberal Democrat (oh for a proper liberal party), then without a doubt, the Conservative Party.

I hope that it isn’t the end of my association with the Conservative Party.  I doubt it is.  They have moved away from me – I have not changed my politics much over the last 5-10 years.  It should be temporary.

Make Ruth Davidson the next leader and I’ll get those leaflets through as many doors as possible.