For obvious reasons I didn’t post the second part on Friday as planned.  You can read part 1 on economics here if you missed it.

As I mentioned last time, I may or may not respond to any comments – any blatant lies I will simply delete.

I see polls of Conservative Brexit members in particular who keep stating that sovereignty is by far their number 1 reason for voting to leave.  But what does it mean?

Travel back thousands upon thousands of years, to cavemen existence (no I’m not saying we will all become cavemen if we vote to leave), and it would be very likely that the sovereign voice would have been the hunter gatherer in the family.  Nobody would have been aware of other continents and certainty there would be no need for laws and regulations from afar.

Subsequently humanity became organised through small villages – rules would more likely have been issued by the village elder, though perhaps with a nod to more widely accepted morals such as thou shalt not steal.

As humanity progressed, regions and occasionally nation-states became the norm, and religion would often provide rules through which larger areas of population would take their laws from.

Eventually we ended up with the 19th/20th century idea of the nation state, where common law is stated throughout the country, with by-laws in local areas, or sometimes regional assemblies.

But as the 20th and 21st centuries have progressed, the need to work together to solve common issues, such as international crime, terrorism, pollution, climate change, etc has seen the need for a range of trans-national or international bodies to not only to tackle common issues, but to stop genocide, discourage war and solve famine.

This is the point where we are at.  The UN, World Health Organisation, International Monetary Fund, Nuclear Non-Proliferation Treaty – the list goes on, and yes, it includes the European Union.  The world, especially since the widespread adoption of the internet, has become more interconnected.

Why on earth would we take a step back towards isolationism?  It does not make any sense to me.

The argument goes that the EU is in control of our laws.  This is a total fallacy.  We set our own laws on defence, health, tax, education – all the most important areas of policy are almost totally and exclusively controlled by the UK government.

The percentage of laws influenced by European Union law (by the way voted on in the European parliament by those you elect – not as Farage will have you by unelected beaurocrats) is somewhere between 7% and 12% depending on what measure you use.  Pretty small.  And only around 2% of all European parliament laws are voted against by our MEPs (though if Farage and co bothered to turn up to vote then maybe that would be even lower) – in other words we vote for 98% of the laws coming out of the European Parliament.

Though I do admit that the amount of regulations influenced by the European Union is closer to 65% (I forget the exact figure).

However, if you want to trade with the single market, and I assume that even the most ardent Brexiteers do not want to stop doing business with our largest export market, then we will need to accept their regulations.  If the EU decides that all Christmas baubles must be square, then we will not be able to sell any Christmas baubles to the European Union unless we implement that regulation, whether we are in or out of the European Union.

Tell me, would you prefer to be in the club, helping make the decisions, or would you rather just follow the decisions?  As someone who values the sovereignty of his country, I would like to be at the top of every possible table helping to make decisions. 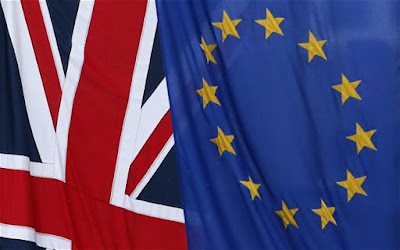 Finally for this section, would you really get all the sovereignty in the world back from leaving the European Union?

The answer is no.

We pool sovereignty not only in the European Union, but in a whole host of organisations/treaties, in an effort to make the world a more agreeable place for humanity.  Some of the most important of which are:

We have implemented laws and also budgetary decisions based on statutes coming out of these organisations – NATO for example insists that all its members spend a minimum of 2% of their GDP on defence.

My view of the world is one which has and will continue to come together to tackle whatever problems it has – genocide, drought, tsunami relief, war, famine, nuclear weapons proliferation, terrorism – the list goes on of issues that we need to work together on.  Europe, and the world as a whole, needs Great Britain at the centre of efforts to resolve problems.

My Britain is not one that hides from the rest of the world.  My version of Britain is one that leads the world.  In the European Union and all other major international organisations.

I believe that we have greater power to change the world and our lives, by pooling sovereignty towards common standards for humanity to live and trade by.
Next up, I will tackle immigration.