OK.  I think the Brexit lot are nutcases.  Some of them make quite lucid arguments but many are fanciful – seemingly expecting a large pot of gold just for leaving the world’s largest trading club.  Not to mention the magical sovereignty – wow.  Get in the English Channel.

On the other side, the Brexiters amongst you probably think I am crazy for wanting to stay in a club with at least some democratic deficiency, possibly some corruption and some damn irritating rules that we have applied to our law book.

Boris used to be one of my favourite politicians but I cannot stand the way he has schemed and gone against what I see as his natural pro-EU stance.  I’m no longer sure I could vote for him as the next Conservative leader.

And I wish John Redwood would stop banging on about Europe as if it was the only thing that mattered to the public, when it is in fact the least of our concerns.

I can see some of you that back in May claimed David Cameron to be an electoral genius, that have now suddenly disowned him as though you’ve just found out he drowned your grandmother.

The above sentences are not the smoothest ever introduction to a political argument, and it isn’t going to be the smoothest period for us Conservatives between now and June 23rd.

I’ll probably have a few arguments in the next few months.  I may even say a few rude words to those banding around absolute bullshit, for example that 70 million people from Turkey will suddenly have free movement of labour within the European Union come October.  And certainly against those for whom leaving the European Union is a net curtain upon their semi-racist souls.

But whatever you think about being in or out of the European Union, even if you take the view that leaving is likely to bring a fairly catastrophic drop in GDP of up to 6%, as some studies suggest, this is absolutely nothing compared to the economic carnage that Jeremy Corbyn has planned for us. 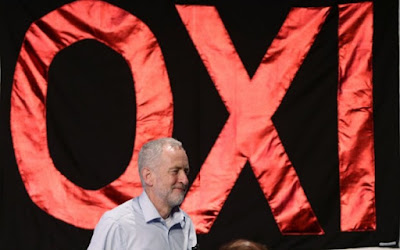 The news yesterday that the failed Greek finance minister, Yanis Varoufakis, is advising the Labour Party on economic matters is a reminder of the true danger that these economically incompetent politicians hold for us.

Yanis took the Greek economy to new depths last year, as capital controls were implemented to stop the remaining banks collapsing.  How anyone could have made the economic situation more perilous in Greece is beyond me, but he managed it.

Now somehow, this forceful chancer, who has about as much tact as Gordon Brown had love for Blair, has recast himself as a western ‘man of the people’ shouting down our alleged austerity as government spending continues to grow.

This character, is now advising the Labour party on economics.  You couldn’t make it up – yet this is deadly serious.

So whatever happens come June 24th, the Conservative party must heal, must come together, must forgive the referendum victors.  And must stop banging on about Europe.

Personally I think Brexit might be a disaster.  It also might work out fine.  But whatever the outcome on June 24th, no matter how much the result disappoints or even angers one side, and there will be some very disenchanted folk out there, we absolutely must not allow Corbyn and cronies anywhere near government.

We must stick together.  Whatever your view on the EU – the real danger is letting Labour back in.